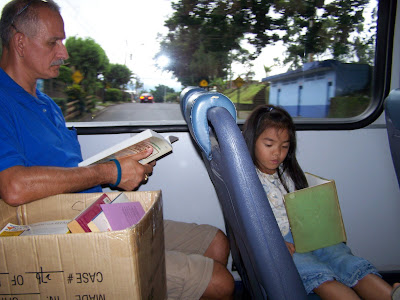 After the first five weeks now you all are rolling along on those vowels. Next step would be to throw in some fun consonants. I usually begin with M. That is a really fun one to teach, as it can be a word into itself. For example the first day we may go out for a yummy treat to eat. As we are eating I say "MMMM, this is so good". That is their first exposure to beginning sounds of words. Usually we only spend two or three days on the consonant sounds.

Day one we would make an art project with the "M". Again be creative and use something you both love. It could even be pretzels shaped like an "M" if you both like cooking.

Day two would be cutting out pictures of "M" words. Try to make very obvious ones that have lots of m sound.

Day three would be sounding out a list of words with all the vowels following "m". The really cool thing is you can say they are reading at this point. All you have to do is have them take a picture of someone eating something yummy and write "MMMMMM" underneath it as the caption. That introduces the kids to the idea that all sounds go together to make a word that actually means something.

They will not just click at this point, that takes may hours of them reading before they actually get this concept. If any of your children have ADD as one of ours did, pretty bad in fact, you may have to change things up a bit.

With our son he did not get reading until he was well into six. In fact it did not click for him until he started piano lessons. Something about reading the music finally did for him what reading practice could not seem to do.

Again take your time, they will get it eventually!
Posted by Roblynn at 5:20 PM