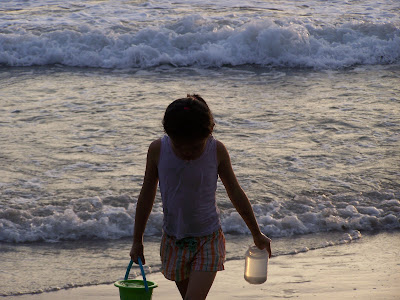 When we moved to Costa Rica my daughter and I always joked about her hubby's "inscinctos". He could tell if someone was going to try and take his backpack, or had bad intentions. Of course his instinctos kind of failed him when he got his bike ripped off in the middle of the day in downtown Heredia. Parked it outside the store and took my granddaughter in with him to check on something. Looked out the window and there was his bike riding away down the street, under some crazy thief.

I had the instinct that we were supposed to go to the beach yesterday, and I am really glad we went. It was a beautiful sunny day, and we three girlies got to enjoy some girlie time, besides the texting which makes me really crazy of course.

We took off bright and early and I almost changed my mind because it was pretty cloudy. We went for it and got on the 9:00 bus to Jaco. Teeny will never forgive me though. She ended up across the aisle from the gay guys making out all the way there and behind the barfing guy that dropped his barf bag and it splashed on her foot LOL! Other than that it was a great bus trip. Oh yeah and they do not take the Super Highway on the bus. Too many stops in between I suppose. So it is still a two hour bus trip to get there.

Once there we went to Mega Super and loaded up on picnic food and found a nice shady spot at the beach. Man if I was a surfer the waves would have been perfect! Since I am a swimmer I just played around in the shallow and stayed away from all the surf boards flying around. Do you get the idea there were lots of surfers? There were tons!

Baby ended up making a new friend. A little local boy who was just as daring as she about the waves. They were getting pretty roughed up and trying to outdo each other on the daring scale. I just stood ready to grab them if they got pulled out. The poor boy took a pretty good roll and ended up with a bleeding back from the rocks.

Ah yes the rocks. We have renamed Jaco, Rocko! The rocks were so bad where we were. We were not down by the "tourist" area just because we were too lazy to walk down there. We stayed up north where all the rocks are.

For the last hour baby made friends with two little girls that spoke English. That was such a treat for her to be able to play with friends who spoke English it did my heart good. I was sad to leave, but alas we had a bus to catch for home. Thank goodness we did not get the same seats near the same people on the way home!

The minute that bus rolled out baby laid down and crashed all the way home. As we were getting off the bus I heard the gringo behind us say to his buddy," that little girl slept all the way here."
Posted by Roblynn at 2:50 PM